The third generation of the European Ford Ranger was introduced in 2011.
It received a facelift in 2015, raising its status from a simple, utility pickup truck, to a lifestyle vehicle.

The 2015 Ranger Super Cab was part of the Ford Ranger lineup and it was refreshed as well. Even though it wasn’t a true five-seat vehicle and more of a two-seat one, it was continued and sold along the rest of its brothers with some improvements.

From the outside, the most striking modification was at the front, where a chromed grille with three wide bars was installed. The new angled headlights were swept on the fenders, like most of the SUVs on the market. The door-mirrors featured chromed cases, to enhance the adventure look even in a parking lot.

Inside, the 2015 Ranger Super Cab was offered with the new, SYNC 2 connectivity system, which was available with voice commands. It featured an 8” touchscreen with color-coded corners for easy menu navigation. The Super Cab body featured regular front doors and rear-hinged half-door in the back. Inside the cabin, there were two regular seats for the front occupants and a small bench in the back, for temporary use. It was more useful as a trunk.

The 2015 model featured an evolution of the 2.2-liter diesel engine, which was offered in two power options: 130 hp and 160 hp, respectively. The top of the range Wildtrak version was equipped with the same inline-five 3.2-liter unit good for 200 hp. Apart from the later version, all the others were available with 4x4 on-demand or two-wheel-drive. The Wildtrak was 4x4 only. 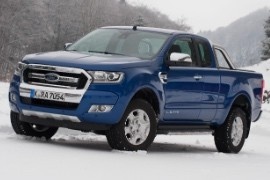