For the 2008 model, the Honda Civic Sedan has received the Si version as well.
With the rev-happy engine under the hood and a four-door bodywork, it was a good choice for those who were looking for a reliable family sedan, but with hot-hatch performance.

In 2006, Honda introduced the eight-generation of its Civic model as a Sedan and Coupe in the US. The European received the Sedan and a hatchback with 3 or 5 doors. But only in the U.S. the four-door sedan received the left-hand-drive Si model.

From the outside, the redesigned front bumper, the clear headlights and clear turn-signals were some of the exterior modifications added to the sedan. The Si version received specific 17” light-alloy-wheels and a low-profile rear wing-spoiler on the trunk lid. From the outside, only the front and rear Si badges, and the side decals on the rear doors would tell that it is not an ordinary Civic Sedan.

Inside, the deeply bolstered seats were highlighted with red stitches. Red backlit gaugest, aluminum pedals and few bits of leather round up the interior of the Si version. An option for a 6.5” navigation system for the infotainment unit was available.

The drivetrain of the Civic Si was different than the rest of the Sedan range. It offered a stiffened suspension, a 6-speed manual only transmission with a limited-slip differential. These were good features for a car that boosts out 197 hp. 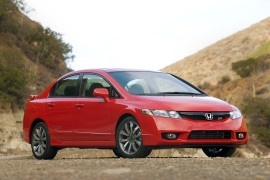