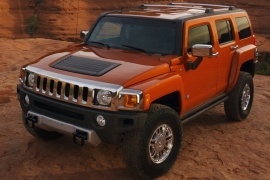 It was the most powerful version of the, otherwise unwanted, Hummer H3, and it was introduced in 2007 as a 2008 model at the New York Auto Show.
Born on the battlefield, the Hummer brand evolved toward civilian use. While the H1 remained the most appreciated version, the carmaker tried to offer smaller vehicles to be used in normal traffic. The H3 was the smallest-sized Hummer, even though it was a big vehicle.

The H3 was based on the same chassis as the Chevrolet Colorado/Isuzu D-Max. The bodywork was massive, tall, with straight surfaces and small windows that resembled the army’s armored troop carriers. Its flared fenders, both front, and rear amplified the tough image of the car. For the Alpha version, the carmaker installed chromed badges in the back and 16” chrome wheels. A special package was available as an option. It included bright roof crossbows, a chrome fuel door, a body-color grille, and a unique spare tire cover, tires, wheels, center cap, and a brush guard.

The interior was similar to other H3 models, and it was enhanced for the 2008 model-year. The child safety locks were easier to use. Hummer installed new switches for the windows and standard head curtain side airbags to offer more comfort and safety for its customers. Hummer offered a rear-view camera that displayed the image on the nav-sat screen for the infotainment system on the options list.

Under the hood, the H3 Alpha featured a 5.3-liter V8 paired to a 4-speed automatic gearbox. Since it was built to be the most powerful in its stable, it featured a different, 4.10:1 axle ratio.