The super-mini car segment in Europe was important especially in crowded cities and traffic jams that often led to grid-locks. Considering this, there was a real need for vehicles that could offer a small fuel consumption, enough comfort, and a small price.

The Hyundai i10 was an important vehicle for the Korean brand since it was on top of their sales in Europe. The 2019 model was designed, developed and made in Europe. The front aggressive look of the car was complemented with newly designed light-alloy-wheels, which were offered as an option. Some interesting details could be noticed in the rear side of the car, on the C-pillars where the i10 logo was embossed on the outer plastic trim. The same i10 was visible on the taillights, like the one found on premium vehicles. In the back, depending on the options, there was a splitter and no visible exhaust pipe.

Since the wheelbases have been extended when compared with its predecessor, the 2019 i10 offered more room inside. It also featured more amenities such as an 8” infotainment display with a navigation system, that was offered as an option, automatic climate control, heated seats and steering wheel.

For the drivetrain there were two choices: a 1.0-liter and a 1.2-liter engine. The former was available also in a turbocharged version. The standard transmission was a 5-speed manual, but a 5-speed automatic was available. 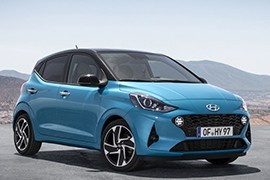