Hyundai shocked the world when it introduced the i30 N version in 2017.
The 250 hp hot-hatch was fitted with all the amenities to tackle the other cars from its class, but it was updated in 2020.

After Hyundai decided to enter the World Rally Championship to get more promotion, even though it wasn’t the fastest or the best hot-hatch on the market, it was a beginning. Three years later, it brought an enhanced version of the i30 N.

The designers took a second look at the car’s details and improved most of them. They made the car looks more aggressive. At the front, the N-signature was visible on the grille. The N-logo was integrated into the wheel-caps as well. The LED-headlights with V-shaped daytime running lights enhanced the look. On the sides, the side-sills were designed to improve the aerodynamic.

Hyundai installed a revised interior for the 2020 model year and enhanced the instrument cluster with LED lights that changed their colors according to the oil temperature and raised the tachometer’s red line. Between the two large dials, the TFT color display showed the information for the car’s status.

Under the hood, the 2020 i30 N featured a turbocharged 2.0-liter engine with direct-fuel injection. It offered 280 hp, five hp more than the non-facelifted version. It was mated as standard with a 6-speed manual that sent the power to the front wheel. Hyundai offered an automatic 8-speed transmission and an electronically controlled Limited Slip Differential. 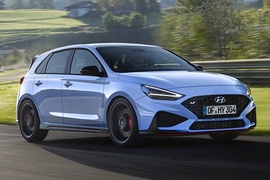