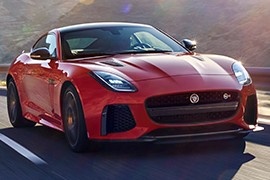 Jaguar evolved under the Indian management and developed new products that brought the British brand back to the spotlights.
The F-Type took Jaguar where it ended the E-Type chapter and the result was stunning. It was a complete package of beauty, performance, and elegance. Its lines were not Italians, its engine was not German and its management was not concerned to install the same buttons and horns from other mass-market production vehicles. Then, when the customers acknowledged the success, it came with a fierce coupe.

No more talking! That’s what the face of the F-Type SVR seemed to tell to the audience. A big, black grille with a horizontal bar (mandatory for the license plate) and a few other air-scoops to cool the brakes or channel the air formed the top-performer front fascia. A pair of vents on the hood resembled those installed in the past on the V12 engined Jaguars. At the back, a retractable wing ensured a zero-lift aerodynamic effect for the car.

The interior must have been crafted with a keen eye for detail. The quilted leather seats, the sound system, and the dashboard featured a unique, Jaguar style. Its sport-bucket seats hugged the occupants and denied them any lateral movement in the corners.

The most important part was the technical layout. Under the hood stood a supercharged 5.0-liter V8 that could propel the car up to 200 mph (322 kph). You don’t have to be a genius to realize that the 575 hp engine could take the light coupe even further. Still, Jaguar denied any production vehicle to overtake the legendary Jaguar XJ220 supercar. Last but not least, the F-Type SVR was all-wheel-drive. 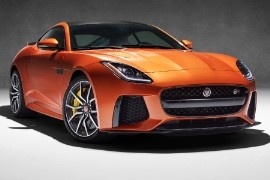 Almost three decades separated the Jaguar E-Type from the F-Type.
It was a long time and it needed a new owner to finally launch a true successor for the famous two-seater coupe of the ’60s.

Jaguar launched the F-Type in the roadster version in 2013 and, soon after that, it introduced the fastback coupe version. It was a car that met most of the British brand fans’ expectations. In 2016, the F-Type received its most powerful version: the SVR.

Introduced at the 2016 Geneva Motor Show, the F-Type SVR coupe showed no mercy for its rivals with a 5.0-liter supercharged engine under a sleek and aerodynamic bodywork. The flat and low hood featured black air-exhausts. The front fenders were wider and featured air-vents to extract the air from the wheel-well. A bigger and modified front bumper with an aggressive-looking apron were installed. A small wing in the back and four exhausts completed the mean look of the car.

Inside, no detail has been left aside. The Alcantara covered dashboard, the leather upholstery on the seats and door panels plus the center console was crafted with a high attention for details. The instrument cluster featured two big dials for the speedometer and tachometer plus a TFT screen in between them, for more information.

But the mechanical part was the real beast: a 575 hp engine was mated to an 8-speed automatic. The all-wheel-drive system was developed by SVR, especially for a high-performance car. And the F-Type SVR was a true performance coupe.