The smallest Koreans refreshed the tiniest Kia, the Picanto.
Based on the same platform as the Hyundai i10, the little Picanto received an upgrade in 2020.

Due to the stricter Euro 6d norms, which imposed more safety systems besides the emission values, the smallest pony in the Kia’s stable meets the market with more features and a restyled look. The Russelsheim design studio enhanced the look and feel of the small-class vehicle.

Kia Picanto offered a happy image, far from any form of aggressiveness. The front fascia of both the “GT-Line” and “X-Line” Picanto models has been revised to give each car a more purposeful design. It started with the “tiger-nose” grille, which featured a new textured surround and open-link appearance. The chrome-effect surround formed a sweeping shape that extended into the lower part of the redesigned headlamps, giving a wider stance for the car.

Inside, the Picanto featured a series of visual and technological upgrades, centered around a bigger 8.0-inch widescreen infotainment system and a high-resolution 4.2-inch digital display in the instrument cluster. Depending on trim level and market, the Picanto’s cabin was offered with a black cloth or man-made leather seats. The cabin was finished with black, silver, or gloss black highlights in the door, on the dashboard, and around the gear selector.

The engineers installed two new gasoline engines for the engine compartment, enhanced for fuel-efficiency and low CO2 emissions compared to their predecessors. The base version was a 1.0-liter naturally aspirated unit that offered 67 hp, while the top-spec model featured a 1.0-liter T-GDI (Turbocharged Gasoline Direct injection) engine good for 100 hp. 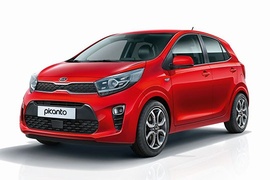