Back in 2005, the Bugatti Veyron was the most advanced hypercar money could buy you.
In 2015, though, the crown was passed to Koenigsegg’s Regera, a mid-engined beauty that could easily be part of the LMP1 series at the 24 Hours of Le Mans.

Starting with its name, the Regera, which is Swedish for “to reign”, tells you this hypercar was built on purpose to dominate every other machine on both road and track. Design wise the car stays close to what Koenigsegg has accustomed us so far, with a low aerodynamically sculpted silhouette, wide bulging windscreen, Dihedral Synchro Helix Doors and other cool features. But the best part comes out of what’s underneath that lightweight shell.

Although the company hates to call it a hybrid, the Regera comes with a traditional combustion engine as well as three electric motors. The difference is that there is no actual gearbox, with only a hydraulic coupling and a differential connecting the engine to the rear wheels. This system is called the Koenigsegg Direct Drive (KDD) and is said to be way better than any other hybrid system made so far. 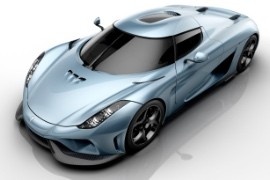