After a long hesitation, if the Lamborghini should launch an SUV or not, the Italian company introduced its contender in the Sport-SUV market: the Urus.
Back in the ’80s, Lamborghini unveiled a very special car: the LM002. It was a weird project made by the Italian company and all 328 units were sold with a high sticker price. It was powered by a V12 Lamborghini Countach engine. It had a top speed limited to 200 kph (124 mph). Fast forward to December 2017 when the Urus was unveiled.

The angular look of the car resembled other supercars from the Lamborghini stable. Its big front bumper with a huge lower grille and air-intakes made the car look angry. From the side, the swept profile and the sloped rear end were designed in the classic, Lamborghini, look. The black overfenders on the wheel-arches inspired some off-road abilities.

Inside, the Urus was a clear member of its family. The rectangular shapes and the combination of carbon-fiber and aluminum elements resembled a jet-fighter cockpit. A big digital display was installed on the instrument cluster. The most important shape that contoured the car was the hexagon and that was visible in most of the details inside the car.

The Urus used the same platform as the Audi Q7/Q8, Bentley Bentayga, and Porsche Cayenne. Under the hood, there was a V8 turbocharged engine sent its power to the all four wheels via an 8-speed automatic transmission, and it featured a biased torque toward the rear wheels. 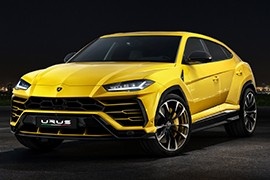