In 2016 Land Rover dared to cut the Evoque roof and made it a convertible, in the same way Nissan offered the Murano with a rag-top.
Unfortunately, both of them shared the same fate, and their sales figures were less than satisfactory. On the other hand, Land Rover benefited from the great image on the market, and the Range Rover Evoque was more of a fashion item than a transportation device. The British brand was known enough for its bold moves on the market, and their idea didn’t seem out of place, but maybe it was not the right time.

The Evoque Convertible shared some parts with the three-door version. It sported the same front fascia with slim headlights and a black mesh-grille above the bumper. On the lower side, a broader and taller grille surrounded by a black rim made the car looks taller than it was. From its profile, the straight, ascending beltline ran uninterrupted by any B- or C-pillar. It was a true cabriolet for four passengers. In the back, the small trunk was opened upwards, if needed.

Land Rover built the Evoque’s with four seats, but the rear passengers hardly had any legroom if the front occupants were just a bit above an average-sized adult occupant. On the other hand, for the front seat occupants, there was room enough. The flat, low-mounted dashboard featured a tilted center stack extended toward the center console.

Under the hood, the Evoque Convertible featured a small engine range but offered enough power and torque for short and long trips. 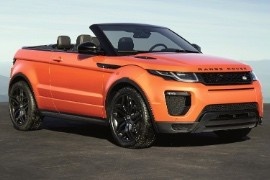