The horsepower battle evolved in almost all vehicle classes.
While it was considered normal for the sports car’s territory, it reached an unusual hype amongst the SUV car makers. And Range Rover couldn’t resist temptation.

SVR is the ultimate version tuned by the SVO – Special Vehicle Operations. A special division owned by the Jaguar – Land Rover that built and developed vehicles from both brands for better road-performance. The SVR featured more than just an addition of power. The exterior design was changed with a new aerodynamic package. The SVR version was fitted with a dedicated carbon-fiber hood. A huge grille was installed in the lower part of the front apron to cool the engine. Two side vents were added for the braking system. In the back, a twin dual exhaust was installed to enhance the V8 supercharged sound.

Inside, despite the large size, it featured four individual seats fitted with sport-bucket seats. In an SUV! The dashboard was fitted with new technologies and a big, 12” touchscreen on the center stack. It offered a twin view: one for the driver and another for the side passenger. A head-up display was installed for the driver, showing information from time to time at the eye level.

The SVR version featured a re-tuned 5.0-liter supercharged engine carried over from the Range Rover Sport Supercharged. It offered 575 hp and 700 Nm (516 lb-ft) of torque. It was mated as standard with a ZF 8-speed automatic gearbox. 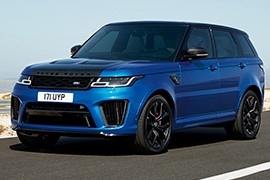