The first generation of the Land Rover Range Rover Sport was launched in 2005 and it was changed in 2013 when the second generation was released.
In 2017 a facelift was introduced.

The 2018 Range Rover Sport received many upgrades on all the important areas: exterior, interior, and drivetrain. But the car was true to its core-roots, as a vehicle suit for hard off-roading and still be able to be driven in crowded cities and look good in front of the Opera.

The new LED headlights were fitted as standard, but offered in four levels: LED, Matrix, Pixel, and Pixel-laser LED. While the first version offered a good illumination for the road with 24 LEDs, the top version offered 144 light-emitting diodes that could light-up the road up to 500 meters. In the newly designed bumper, the LED fog-lights were slimmer and brighter. In the back, a bigger spoiler was installed to prevent the dirt on the rear windscreen.

Inside, the Range Rover Sport received an ample revamp with the introduction of the dual-view touch-screen monitor from the Range Rover Velar. The new, slimmer, front seats offered better body support. The standard version offered 8-way adjustments and a top version with up to 16-ways. To enhance the quality of the inside air, the Range Rover Sport was fitted with an air ionization system. 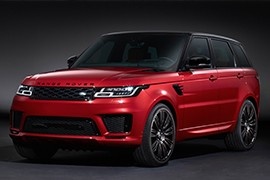