Land Rover decided to introduce a brand new member of the Ingenium engine family by first fitting it under the hood of a special edition Range Rover Sport, which is oddly named the HST.
The car itself is quasi-identical to a regular Range Rover Sport, save for some special badging and carbon fiber trim on the hood, front grille, side air vents and the tailgate.

The real new is found under that flat hood, where a turbocharged 3.0-liter straight-six powerplant has been paired with an integrated starter/motor that takes its juice from a small 48-volt lithium-ion battery.

Essentially a mild-hybrid in the vein of Mercedes-Benz’s similar straight-sixes, the new Jaguar Land Rover engine is part of a GBP 1 billion investment plan into the modular Ingenium powerplants. The electric energy harvested by the 48-volt system through regenerative braking is used to either assist the internal combustion engine or power an electric supercharger.

With no less than 400 horsepower and 550 Nm of torque from a 3.0-liter displacement, the Range Rover Sport HST’s engine is more responsive and inherently better balanced than the V6 it replaces. On top of it, the addition of the electric supercharger alongside a twin-scroll turbocharger virtually eliminates turbo lag. After the HST it will be available on other JLR products as well. 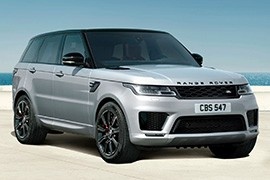