Lotus considered that a special car needed a unique, final edition, and it proved that with the introduction of the Exige Sport 420 Final Edition at the beginning of 2021.
After 21 years since the start of the Exige series, Lotus regained its past glory. It started with the Elise and continued with its coupe cousin, the Exige. Over time, the two vehicles shared many of their components and increased Lotus’ value on a market that almost forgot the former British glorious brand that stunned the Formula One world.

At the front, the Exige kept its four-headlights design with clear glass over them. A special bumper with an integrated center grille and two side pods increased the aerodynamic downforce. On the front fenders, the carmaker installed specific stickers that marked the last Exiges. Regardless of the car’s color, ell the 420 Special Editions featured a black roof. A black wing mounted on the back panel kept the car planted during fast cornering.

Inside, the carmaker installed race bucket-seats with race-harness. They were upholstered in Alcantara and red, contrast stitches. The steering wheel was thicker and wrapped in Alcantara as well, and the same material was used for the door panels. For the instrument cluster, Lotus installed a TFT display with a choice of two screens: one with regular dials and the other with race-type information. 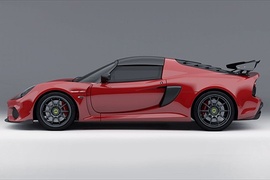