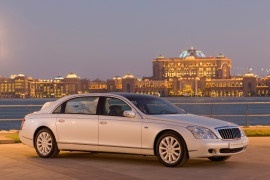 The half-cabrio Maybach was the luxury German car that tried to shatter the Rolls-Royce world with an idea that was used before in 1929.
The rear open-top was named Landaulet and few car-manufacturers in the world produced it.

The Maybach brand resurrected by Mercedes-Benz in 2002 and by 2006 their main products were the 57 and the 62 and both had ultra-luxurious features inside. In 2008, the 62 S was launched with the Landaulet version. The cabriolet for the rear passengers.

The Maybach engineers reinforced the side-walls of the cabin with thin, high-strength, steel tubes. The top is weather and wind-proof so, when it was closed, it offered a feeling of a regular enclosed saloon. Maybach has adapted the luxurious rear compartment to the requirements of open-top motoring. For instance, the rear head restraints were slightly larger than on the saloon and helped reduce wind turbulence. Another slim wind deflector was automatically raised at speeds above 70 km/h. An intercom system was fitted so the rear passengers could talk to the driver.

For the driver’s area, all the interior trim were surfaced in black piano, and for the extensive leather appointments, Maybach has used particularly exclusive glossy stromboli black leather.