McLaren introduced an open-top version for the 720S in 2018, but It did it so that the car didn’t lose its overall performance.
When McLaren’s engineering team developed the 720S bodywork, it had the vision of the roadster in mind. Thus, even if there were some reinforcements added, the car was just 49 kg (108 lbs) heavier than its fixed-roof sibling.

The wide triangular-shaped headlights are splitter into two halves by the LED daytime running lights. The headlamps’ black background made the entire lamp looks part of the bodywork, like those installed on the 720S Coupe. Behind the cabin, the carmaker added a pair of safety arches concealed under two bulges, which resembled the “hunchbacks” from an F1 race car. When covered, the electrically operated roof came from behind and hid under the panel that sat above the engine compartment. It could have been opened and closed at speeds up to 30 mph (48 kph).

Inside, the cabin offered the same spacious environment as the coupe. Moreover, McLaren installed the roof with an adjustable tinting glass. That allowed the occupants to increase or lower the interior luminosity according to their preferences. In front of the driver, the carmaker added the same tilt-down instrument cluster that showed only minimum info when it was lowered, for the race-track, or a complete TFT display that also displayed the rear-view camera when backing up.

With a carbon-fiber monocoque and its experience in creating open-top race cars, the McLaren 720S was stiffer than many other closed-roof coupes on the market. Its performances were lowered, with the top down, to 202 mph (325 kph), while the top speed remained the same as on the coupe. 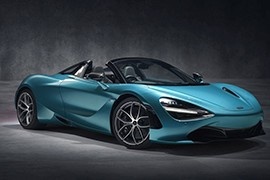