The SL offered the unique choice of a luxurious personal roadster with a retractable hardtop in the Mercedes-Benz lineup, and the 2016 model was no exception.
Mercedes-Benz brought the facelifted version of the SL just in time to spend the 2016 summer under the blue sky with a new model year. Its retractable hard-top was one of the features that made it a best-seller in the GT class.

Its redesigned front fascia sported a 3D design on the grille and kept the horizontal slat that supported the three-star badge. With its new LED headlights and intelligent lighting system, the 2016 SL offered more confidence during night driving situations. The aerodynamically profiled front bumper featured two side-scoops to cool the disc brakes and a centered, trapezoidal-shaped grille at the bottom. On the hood, the designers made two power-domes evoking the car’s sporty character. In the back, Mercedes-Benz added further modifications to the completely red taillights, unlike the 2012 model that featured a clear upper section. Finally, the triangular, flat exhausts replaced the rectangular ones and flanked the new splitter installed under the bumper.

The dashboard featured a binocular-style design for the instrument cluster, with the tachometer and speedometer combining the classic analog look with modern technologies. There was a new sporty design for the dials and needles. A TFT multi-function display found its place in the middle, between the circular instruments.

Under the hood, the 2016 SL offered a choice of two engines: the upgraded 3.0-liter V-6 for the base version and a 4.7-liter V-8. Both turbocharged engines provided more power to the new 9G-Tronic (dual-clutch) gearbox. Mercedes-Benz enhanced the Active Body Control system for higher cornering speeds and more comfortable rides as well. 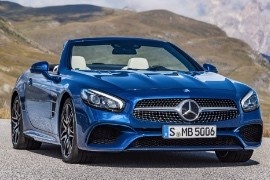