Mercedes-AMG introduced a facelift for the C43 lineup at the 2018 Geneva Motor Show and granted better performances for the premium German sedan.
After AMG became a separate brand and introduced new models, which Mercedes-Benz did not share, it continued working on the regular cars built by the three-pointed-star brand from Stuttgart. The C43 was just one good example.

The fourth generation of the C-Class started its career in 2014 and, four years later, it went through a mid-life cycle refresh. The AMG clothes sported the twin-louver design on the grille with the big star in the middle. Its front bumper featured a big grille at the bottom and two side scoops. The refreshed headlights, with smoked interior and a single LED line for the daytime running lights, were specific for the AMG lineup. In the back, the vehicle received new signature taillights with an LED C-letter inside. Under the bumper, AMG installed two round twin exhausts to complete the aggressive package.

Inside, the carmaker added more carbon-fiber trims on the center stack, door panels, and center console. At the front, the C43 featured high-bolstered bucket-seats clad in Artico man-made leather. The rear bench was profiled for two passengers. It was AMG’s way to tell that it’s a four-seat car, and the third rear passenger should be a kid, at most.

Under the hood, the 3.0-liter V-6 engine received 23 hp and reached a maximum of 390 hp. It was paired to a 9-speed automatic (dual-clutch) gearbox and sent the power to all corners via a rear-biased 4Matic all-wheel-drive system. 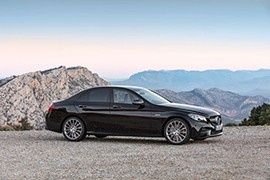