It was the 4-door version of one of the fastest cars on the road and even with the base engine, it was capable of reaching 100 kph (62 mpg) in under 5 seconds.
And it did it with style.

The AMG GT 43 4Matic 4-Door is a very long name that said not a single word to those who are not into cars. But since AMG started its own lineup of vehicles that didn’t have any equivalent for the Mercedes-Benz brand, it showed its target: the Porsche brand. The AMG said that this was the 4-door version of the AMG GT Coupe. In theory, it might be right, but the look of the car doesn’t say the same. It is bigger, taller and has room for four passengers plus a usable trunk.

Inside, the sporty interior is present everywhere. The bucket seats, the dashboard, and the steering-wheel were on the same page. Maybe it wasn’t the most comfortable car to drive around with a family, but at least it could get faster to the destination.

Under the hood, it wasn’t the smallest engine from the AMG manufacturing plant, but it was the smallest on the AMG GT lineup. It offered 367 hp and an additional 22 hp were supplied over a short period by the belt-driven starter-generator. The standard transmission was the AMG Speedshift TCT 9G, where 9G meant 9 gears. And yes, it was all-wheel-drive so the driver didn’t have to worry about too much power sent only to the rear wheels. 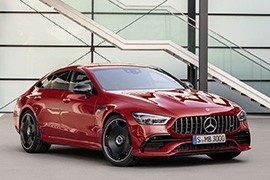