While a three-door S version was already natural for the MINI, the 5-door version meant that someone could take the same car for its personal pleasure and to use it as a family car as well.
MINI introduced the fourth generation of the Cooper S in 2021. The carmaker didn’t offer a 5-door version for the sporty model since the brand’s revival in 2000, but soon the customers started to ask for a more punchy version with a set of doors for the rear passengers. Thus, they could claim that they bought a family car.

While some purists claimed that a 5-door version was blasphemy for the MINI, others just nodded their heads and paid for it. It was a truly practical sports hatchback vehicle in the mini segment. The fourth generation of the MINI Cooper S four-door featured a striking front fascia with a grille surrounded by a piano-black trim. A set of additional air-intakes made their way in the front apron to feed the turbocharged engine. The Cooper S was available with an 18” Pulse Spoke two-tone set of wheels apart from the standard 17” ones from its sides. In the rear, the dual exhaust took center stage under the bumper.

Inside, MINI received a 5” instrument cluster fitted as standard. An 8.8” touch-screen dominated the top of the center stack. The dashboard’s front panel sported a carbon-fiber trim. Its front sport-bucket seats featured high-bolstering. Its five-doors configuration allowed a better ingress and egress from the car, while the rear bench seatback was split-folding.

Under the hood, MINI installed a turbocharged 2.0-liter engine with TwinPower technology that reduced the lag and rocketed the car to 100 kph (62 mph) in a mere 6.9 seconds (6.7s for the automatic transmission). 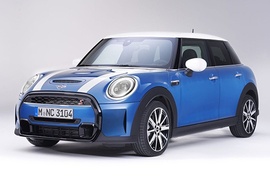