In 2000, the MINI brand raised from its ashes, helped by its new partner, BMW, and introduced a new model range.
In 2021, MINI already reached its fourth generation and came full-power in a few versions: three doors, five doors, and the convertible. That refresh was mandatory; hence there were new emission regulations in Europe, and the carmaker tried to stay on top of its game and offer the best products in the segment.

It is hard for a designer to make a nearly identical, yet different, vehicle. The MINI’s shape was everyone’s vanilla, and it had to stay that way. For the 2021 model, a piano-black surrounding emphasized the grille area, while a fat horizontal bar sported the license plate. In the rear, the Union Jack appeared on the taillights. The MINI sported a unique multi-tone roof.

Inside, MINI received a big display instead of its regular dials in the instrument cluster. The touch-screen on the center stack was already offered as an option from the third generation. Its front sport-bucket seats featured high-bolstering. The carmaker kept the same design for the steering wheel with three thick spokes and added buttons on the horizontal ones. Like on its predecessors, to access the rear seats, the front ones had to be tilted and slid forward.

Under the hood, MINI offered the three-door version with a choice of three engines, apart from the electric version. The carmaker completely removed the diesel versions from the lineup. 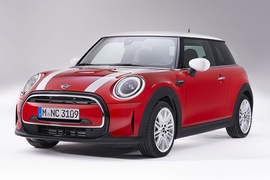