Its classic design, cozy cockpit, and good performance made the Morgan 4/4 a great companion for those who enjoyed the ride more than the destination.
The first Morgan 4/4 was introduced in 1936 and was the most popular model built by the British car-maker. Due to the war, the production stopped and it was resumed in 1946, with an improved model that featured permanent window frames.

In 2008, the Morgan 4/4 was under production for more than seven decades. It was the longest production model in the world. While the technologies and society evolved, the shape of the 4/4 remained similar to the one from 1955. With flared fenders in the front, a curved and grille with vertical slats and a long hood relatively to the car. The flat windshield was still the same. The side, removable windows, were new.

The interior featured two seats and leather upholstery. The entire cabin was finished with leather as well. The dashboard was flat and the dials were mounted in the middle. Thus, it was easier for the factory to built left- or right-hand drive vehicles. There was no air-conditioning or power windows. The fabric roof was manually folded.

Over time, Morgan mostly worked with Ford for the engines. The 2008 model was fitted with a 1.6-liter engine from the big car-maker. It started the production with a Ford gearbox, but soon it was replaced by a Mazda MX5 5-speed gearbox. 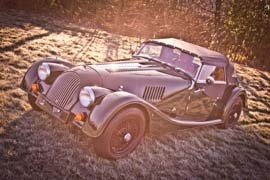