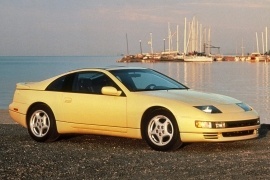 Nissan had a long history of the Z-cars, as it called them, and the 1990 300ZX model was its best creation to that date.
A sports car was not defined only by its performances. It had to look like one and have a history behind it, and the 300ZX had all the elements included.

Its long hood with a streamlined shape and flush headlights were unique on the market. The front bumper incorporated a lower apron which sported wide and slim air-intakes to cool the engine. From its sides, the short and arched roofline started with a very raked windshield and ended with a sloped rear windscreen flanked by the thick C-pillars. In the back, the wide taillights were split into four clusters on each side. To confirm the sports car’s status, Nissan installed four exhausts under the bumper.

Inside, the car featured two sport bucket seats separated by a tall center console, which hid the transmission tunnel. The carmaker placed the cassette player, two vents, and a small storage compartment on the sloped center stack. Strangely, Nissan mounted the climate control buttons on the instrument cluster’s rim. Inside the instrument panel, Nissan placed two equally sized dials for the speedometer and tachometer and another four gauges. It didn’t forget to include the oil temperature and the boost pressure indicator.

Under the hood, Nissan installed a 3.0-liter twin-turbocharged V-6 engine. It mounted it behind the front axle, so it might be called a front-mid engine vehicle. It did that to improve the weight distribution. But as a sports car, the 300ZX had to be fast on the curves as well, and the carmaker installed a four-wheel steering system, which helped during fast cornering maneuvers. 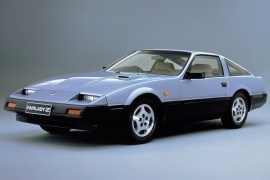 The 1984 Nissan 300 ZX was one of the transition models from Datsun to Nissan.
It was launched in 1983 and it was available with a choice of turbocharged 4-cylinder and with a V6 unit.

After the Datsun 280Z, also known as the Nissan Fairlady, was stopped, the new generation stepped in with all the good things that the Datsun-Nissan had in their shops. It was a revolutionary car for its time and featured all the discoveries of the Disco era and everything that was available to make the driving experience as a sci-fi one.

Since it was in the ’80s, the pop-up headlights were somehow mandatory on a GT-car, such as the 300ZX. But unlike other vehicles that completely masked the headlights, in the 300ZX there was a small part of the lamps that were exposed even when they were rolled down. In the rear, the car featured big taillights and a red strip connecting them. On the models after 1986, that red strip disappeared, along with the Datsun badge on the car.

The interior was interesting. For starters, there was a choice of two instrument clusters. One was with regular, analog, dials, and the other was with a complete digital appearance. Bellow the dashboard, there was a choice for cassette-players with equalizer. It was the mid-’80s, after all. The high bolstered seats featured a special design for the headrest, which could have been adjusted back and forth.

Under the hood, the 300ZX featured turbocharged or naturally aspirated engines, mated to a 5-speed manual or a 4-speed automatic.