Nissan introduced a minor facelift for the 370Z in 2012 and brought some updates for the open-top version as well.
The 370Z’s roots are going back in time to the legendary Nissan Fairlady and the Datsun 240. Even after the alliance with the French carmaker Renault, the Japanese company didn’t even think to stop producing the 370Z, even though it was not the biggest profit-maker in the stable. But, by 2012, it had to work on some areas and increase the car’s sex-appeal.
At the front, Nissan kept the Z-shaped headlights but changed the headlamps inside it. Its amber top corners for the turn signals were clear on the 2012 model. In the apron, the grille was simple and squared, revealing the big radiator behind it. The carmaker chose to drop the inside fins that made the 2008 model special. In the back, there was a new exhaust, which showed the same round tips.

The 370Z was fitted with a small, cozy cabin that offered great legroom and headroom for the two occupants. The dashboard had a simple and clean layout and offered decent storage space in the center. Its electric convertible system was functional at speeds of up to 5 kph (3 mph).

Under the hood, Nissan installed the same 3.7-liter V-6 engine from the non-facelifted version. Although, the carmaker recalibrated the ECU and released another five ponies. It was paired as standard to a six-speed manual while a seven-speed automatic (dual-clutch) was on the options list. 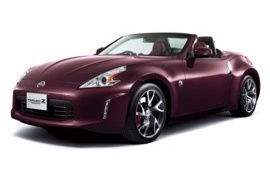