The 2014 Nissan Pulsar was a hatchback built by Nissan for some selected market.
It was a compact-sized hatchback with a long wheelbase and economic engines.

The Pulsar name was like a boomerang for the Nissan brand. It was used since the late ’70s, but not on all the markets around the world. In some markets, it was also known as Sunny or Tiida. But the 2014 model was known mostly as Pulsar around the world. It was based on Nissan’s CMF (Common Module Family) platform, which was used from small vehicles up to SUVs.

The compact hatchback design featured the known V-shaped chromed lines on the grille, with somehow aggressive styling. The front shaped bumper featured three air-scoops, with the largest one in the middle. A sculptured profile with ascending lines and the boomerang-style taillights defined the car’s look. A small roof-spoiler was placed on top of the tailgate and it included the third stop-light.

Inside, there was a simple, yet modern, dashboard with two analog dials on the instrument cluster and a TFT display between them. The infotainment unit was placed on the center console and it looked like it was installed as aftermarket equipment and it was connected to the steering wheel buttons. An interesting waved, the design was featured on the dashboard. Due to an unusually long wheelbase for a car of its size, the Pulsar offered decent legroom for the rear passengers. In fact, at the time of its launch, it had the longest wheelbase in its class.

Under the hood, the Pulsar dropped the hot-hatch version with 200 hp from its previous generation and kept the economic ones of 1.2-liter gasoline and 1.5-liter diesel. They came as standard with manual transmissions, but an option of CVT was available. 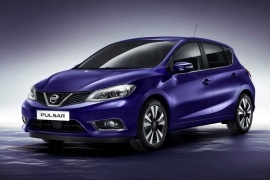