The iconic Nissan GT-R R35 was launched at the Tokyo Motor Show in 2007 as a 2009 model and it received further updates.
The 2017 version received a new interior and 20 hp more than before.

The Japanese car-manufacturer Nissan built the GT-R name over the years and, in 2007, it showed the R35, which was offered for the first time with both left and right-hand drive. The car was so advanced, that it stole the crown of Nurburgring King from the Porsche 911 Turbo. But the evolution had to continue.

The 2017 version was based on the same Nissan Midship Premium platform and its shape was almost the same as 10 years before. The Nissan designers couldn’t do something better than that, or they didn’t have the budget to do it. But they did what they could to enhance both the look and the performances. For the outside, there was a new front bumper installed, with new air-scoops on the sides and, inside the scoops, there was the DRL.

Major improvements were made inside the cabin. The GT-R was meant to be both comfortable and fast. But the luxury was not a key element in the process. In 2016, the designers fixed that. The redesigned cabin featured a premium interior, to fit the high-performance sports car. The dashboard was new, with an instrument panel wrapped in a single, seamless piece of hand-selected Nappa leather. On the center console, the car featured a new 8” touch-screen infotainment system that could connect to Apple CarPlay. 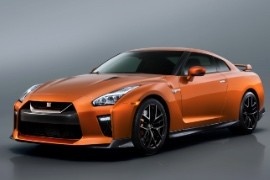