Unveiled at the 2001 Barcelona Motor Show, the Nissan Primera had a distinctive design compared to the previous models.
While the Nissan Primera was already a good car, it was also boring, bringing nothing more than a good drive. However, things changed starting with 2001, and the new sedan became interesting and almost pretty.

While it retained some of the second generation’s styling cues, such as the wing-styled front grille, although larger.

Inside, the Nissan Primera offered great space for its occupants. The unconventional interior design draw attention and drivers might have needed a little time to adjust.

All the main instruments and controls were placed in the center, including the cluster gauges. The way the controls were arranged gave the impression of a flying spaceship interior.

Pretty unique for a car in its segment for 2002, the Primer had a rear-view camera that enhanced safety when parking or driving in reverse, thus not noticing pets, bicycles and small children was almost impossible.

The 3rd generation of Primera came with broad range of engines mated with a 5 or 6-speed automatic transmission or the optional Continuous Variable Transmission.

Safety was also a strong point, as the Primer was awarded 4 stars for side impact and good frontal driver/passengers impact. 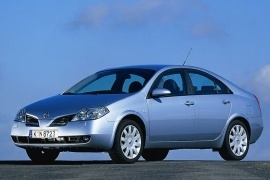