After a not-so-good start with the original Opel Ampera, the German carmaker tried again with a completely different car that retained the same nameplate.
Designed as a compact hatchback, the Ampera-e was the re-badged American Chevrolet Bolt EV. While the original five-door hatchback featured a gasoline-powered range extender, which also turned the wheels at higher speeds, the Ampera-e was exclusively electric.

Its narrow front grille and angular, swept-back headlights made the car look aggressive. In the apron, the carmaker installed a broad grille mainly for aesthetic purposes than functional since there was no internal combustion engine under the hood, and the motor and the batteries didn’t require such a large cooling area. From its sides, the ascending beltline was emphasized by a sloped, upward step toward the C-pillar. At the back, a roof-spoiler adorned the tailgate, while the horizontally-mounted taillights tried to make the car looks wider.

Inside, Opel placed its bets on the innovation card and removed the analog dials from the instrument cluster. It replaced them with a TFT screen. As for the infotainment system, it featured an additional touch-screen mounted on the upper side of the center stack, above the climate control buttons. On the center console, Opel placed the gear lever. Since the car didn’t feature a gearbox, it was more like a drive selector. The carmaker looked like it learned from the original Ampera mistakes and introduced better materials in the cockpit. Still, the fake leather and hard plastic spoiled the hatchback’s sci-fi look.

The powertrain provided a whooping 204 hp motor, which propelled the car to 60 mph (97 kph) in 7.3 seconds, which was already hot-hatch territory. The battery pack provided 60kWh of energy, enough to move the car for 520 km (323 miles). 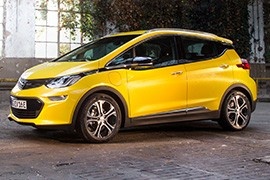