The fifth generation of the Opel Corsa marked its debut at the 2014 Paris Motor Show.
It was the last Corsa generation completely developed by the German car-maker before it was taken over by PSA (Peugeot-Citroen).

The front fascia was characterized by the “wing” shaped headlights, which incorporated the Opel’s signature and LED daytime running lights. The sporty trapezoidal grille featured the chromed Opel badge. A lip-spoiler was installed on the lower part of the apron, and two side air-intakes hosted the fog-lights (if mounted). An arched rear side window amplified the sporty look of the three-door version. The sculptured doors and rear fenders made the car look longer.

Inside, the car featured five seats, but with limited access to the rear seats. On the base models, the dashboard was simple and plain, with a center stack where the radio and climate controls were installed. The instrument cluster was simple and easy to read. On higher trim levels, a new infotainment unit was installed with a 7” touch-screen. It featured connectivity with Apple CarPlay and Android Auto.

The car offered a wide choice of diesel and gasoline engines. Depending on the power version, it was available with a 5- or 6-speed manual fitted as standard. A 6-speed automatic or 5-speed automated gearbox was on the options list. For the 3-door version, the top of the range model was the Corsa OPC that offered 207 hp. 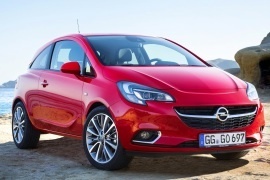