Opel revealed the refreshed 2021, Grandland crossover built on the same platform as its brother Peugeot 3008 and showed a serious visual upgrade.
Sometimes, a carmaker manages to unveil a facelift that looks like a wholly new generation but still calls it a refresh since most of its underpinnings are the same as on the non-facelifted version. That’s the case with the 2021 Grandland, which jumped from the modest-looking 2017 model to an exciting 2021 model.

Since most customers are looking at a car’s front fascia when they want to buy one, Opel designers mainly focused on that area. It kept the same 90 degrees LED daytime running lights pattern but with a sharper look. Its 168 LED headlights (84 per lamp) and black front panel mimicked the face of an electric vehicle. A new grille-mounted in the lower side of the bumper took the cooling job, which sported a 3D pattern and a lower lip spoiler. A pair of vertical air-intakes on the sides gave the crossover a sportier look. At the back, Opel designers look like they lost their appetite for changing and installed slightly redesigned taillights with LEDs and placed wide chromed lettering on the tailgate with the “Grandland” word.

Inside, there was a new dashboard design with two displays. The touch-screen that sat on top of the center was for the infotainment system, while the up to 10” LCD in front of the driver served as an instrument panel. Like its predecessor, the seats were certified by the “Aktion Gesunder Rücken e.V.” (campaign for healthy backs) for their ergonomic shape.

Under the hood, Opel carried over drivetrains from Peugeot-Citroen. It also featured a hybrid system that used the internal combustion engine to power the front wheels and an electric motor for the rear axle. 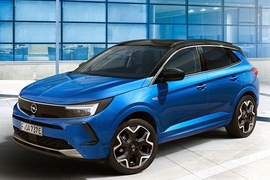