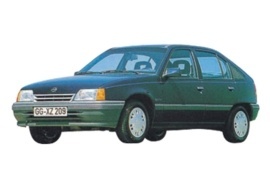 Opel introduced the last generation of the Kadett in 1984 and offered it in a few body versions, including a five-door hatchback.
Back in the ’80s, European customers started to get attracted by hatchbacks. It was the new trend, and most mass-market carmakers had at least one in their lineup. Also, the compact segment was highly contested. Opel was already on its second generation of the Kadett hatchback, and it learned its lesson well.

At the front, the Kadett featured a black, wrapped-around plastic bumper which included the grille. Its headlights featured corner-mounted turn signals, and on the inner side, they were angled down. The overall appearance was a mix between rounded panels and clear angles. At the back, Opel installed a raked-forward tailgate with a decently sized rear windscreen. It added a rear window wiper on the options list or standard depending on the trim level.

Inside, there was room for five adults. The simple design allowed practical solutions. At the front, the Kadett featured cranked windows on the base trim level for all doors or power-operated on the upper versions.

Under the hood, the Kadett featured various engines, both gasoline and diesel units. It was available with 4- or 5-speed manual transmission, depending on the engine. An automatic transmission was available for selected models. The car featured a McPherson suspension for the front and a torsion beam on the rear.