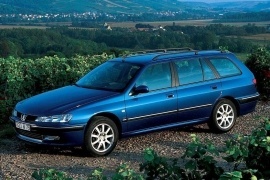 In 1999, Peugeot introduced a mid-life cycle refresh for the 406 range, and, along with the sedan and the coupe, the station-wagon version was upgraded as well.
Peugeot enjoyed huge success with the 406 lineup, and, thanks to its vast experience with the station wagons, it introduced such a bodywork as well for its mid-size segment competitor. But after a few years on the market, the car looked already old, and Peugeot had to face the new wave of bio-design trend that pushed the Mondeo ahead on the sales charts.

At the front, the French carmaker ditched the slatted grille from the ‘96 model and replaced it with a black mesh grille. The headlights received a new angle on their upper side and looked more aggressive. Peugeot shortened the smiling grille in the apron, reshaped-it, and added a pair of fog lights: no more smiling faces from now on for the 406 range. In the back, the carmaker didn’t consider making any changes.

Inside, there were more changes on the dashboard. The carmaker installed a new instrument panel with larger dials and chromed rings around them. On the redesigned center stack, there were new controls for the HVAC system and a new sound system as well. In the back, the 406 Station Wagon provided enough room for three passengers and a big, 526 liters (18.6 cu-ft) trunk with all the seats in place and up to 1,741 liters (61.5 cu-ft) with the bench folded down.

The carmaker offered an extensive choice of engines ranging between 90 hp and 210 hp under the hood. As a novelty for the 1999 model, the carmaker introduced the new 2.0-liter HDI engines available with 90, 110, and 136 hp, respectively. 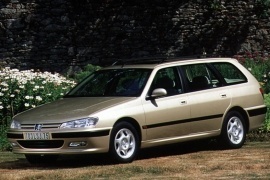 Peugeot had to replace the successful 405 with something better and managed to do that only in 1995 when it unveiled the 406 and the 406 Break that followed in the next year.
The 406 was the last of the ’80s style mid-size vehicles on the European market. Even the ancient Ford Sierra was replaced by Mondeo, while Opel/Vauxhall and Fiat were already on the facelift stages with their cars. Peugeot waited for a while, but when it introduced the 406, it stirred the market. In the station-wagon shape, it offered an alternative for the MPV segment.

With its narrow headlights and a slatted grille, the 406 followed some design cues from its families. On the plus side, it showed an elegant yet sporty profile, even in the station-wagon shape. Its body-colored door-handles and door-mirrors and the rubber strip on the lower section made the car loos longer. In the back, the additional side windows were raked-forward, following a parallel line with the tailgate.

Inside, the new trend with the center stack extended on the center console isolated the driver into its part of the cabin. Modern technologies for its time, such as the digital climate control or the LCD at the bottom of the dials, transformed the 406 into a modern family station-wagon. In the back, the 406 Wagon offered enough room for up to three passengers and a big, 526 liters (18.6 cu-ft) trunk with all the seats in place.

Under the hood, Peugeot offered up to eight engine choices, depending on the market. While the French carmaker paired all versions to a standard five-speed manual, a four-speed automatic was available for selected versions.