Born as a utility van and later on converted into a people-carrier, the Peugeot Tepee Expert shares the same technical platform with the Fiat Scudo, Citroen Jumpy and the Toyota ProAce.
The van industry can be a winning card only if more companies are involved in a project. This is why the PSA Group (Peugeot-Citroen at that time) joined forces with Fiat and Toyota to produce and sell this lineup.

The biggest diesel European diesel-engine manufacturer, PSA Group, installed and gave the main “heart” for this medium-sized minivan, either if it was used as a people carrier or a delivery van. For the passenger version it was fitted with quieter engines, and when those wore the Peugeot badge, the name Tepee was added. Tepee means tent in French. The Expert Tepee was very popular with taxi companies, but its great versatility also made it a useful large family car.

Both the 1.6 and 2.0-liter diesel-engines models returned approximately 7.5 l/100 km (38 mpg), which was impressive for an MPV capable of carrying up to nine people. On longer highway journeys, this figure was likely to improve.

The ability to remove or keep the seats inside could transform it from a people carrier into a utility vehicle in a matter of minutes. Also, it was good to use it as a camping vehicle, where up to four people could have slept inside. This is why the Tepee name was a good choice. 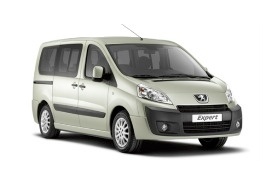