The 2019 Cayman GTS 4.0 was a mix between the GTS version and the hard-core GT4. It was a wolf in sheep clothes.

It was well known by Porsche that its customers are taking their cars to the tracks to compete in friendly races. The GTS 4.0 was built to offer more performance and more grunt for those who didn’t fear to go racing against more powerful cars.

At the front, the Cayman GTS 4.0 featured the same apron as the GTS, with a black grille and body-colored bumper. If the car was ordered black, the whole front would have been black. On the sides, the air-intakes for the mid-mounted engine were black as well. In the back, the dual exhaust was installed, as usual for the range, in the middle of the apron. The retractable wing-mounted behind the engine lid was automatically deployed over 120 kph (74.6 mph)

Inside, the sport seats were covered in Alcantara in the middle and featured the 718 badges embroiled on the headrests. For the GTS version, Porsche developed the Track Precision App, which was useful as automatically recorded, displayed, and analyzed the driving data on the smartphone. The carbon-fiber trims on the dashboard and on the door panels were accompanied by those on the center console.

The flat-six engine was a 4.0-liter with direct-injection and turbocharged. It offered more power than the S-version. It was paired as standard to a 6-speed manual, and there was no option for a 7-speed automatic PDK (dual-clutch), like on the regular GTS. The ceramic brakes were on the options list, for those who were going on the tracks. 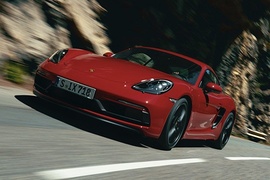