The 992 generation of the famous Porsche 911 was unveiled in 2018 at the Los Angeles Auto Show.
Only six weeks later, the open-top Carrera 4S was introduced to the market.

There was a long history for the powerful, convertible, Porsche 911. The Carrera 4S featured a mix of parts from the Turbo model and the lower specs Carrera. The final touch to the mix was the Carrera 4S Cabriolet, that combined performance and the roadster sensation offered by the open-top vehicle.

The new Carrera 4S 992 generation was wider by 45 mm (1.77”) on the front and with 44 mm (1.73”) on the rear than the generation it replaced. The standard headlights were with full LEDs. The front end resembled a traditional feature from earlier 911 generations: a forward-extended hood with a distinctive recess in front of the windscreen.

The interior was reworked and featured two LCDs inside the instrument cluster, flanking the classical tachometer, which was analog. Also, on the center console, there was a 10.9-inch display used for the PCM (Porsche Communication Management) that supported Apple CarPlay but not Android Auto. The system also featured an online navigation system, with real-time data for the traffic ahead. To open or close the car, a new soft top and mechanism were installed. It could do the process in just 12 seconds at speeds up to 50 kph (31 mph)

The engine was a flat-six cylinder with twin-turbochargers. The total output is higher with 30 HP than the previous generation, reaching 450 HP. It was mated to a standard 7-speed manual or a 7-speed PDK (dual-clutch) automatic. The PASM (Porsche Active Suspension Management) system was standard. 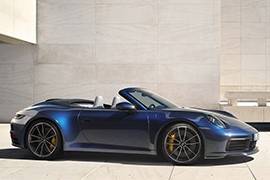