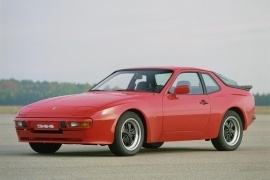 The 944 was the direct successor for the 924, a sports-car built with a lower price than the 911, but still able to offer the thrills of a Porsche.
While the 924 looked too bland to be taken seriously, even though it was a fast car for its times, the 944 aggressive look was more convincing. It hit the showrooms in 1982 and it featured some components carried-over from the 924. It was more of an evolution than a revolution and it was still built at the Audi Factory from Neckarsulm.

From the outside, the wide fenders with clear enlarged wheel-arches both front and rear ensured a muscular look for the 944. It kept the pop-up headlights from its predecessor, and in those times that was considered an ultimate reflection of a sports-car. An integrated, hard-rubber, a spoiler was added at the back of the car, on the lift-gate. It featured body-colored bumpers, with a rubber strip on the one in the back. A single exhaust was mounted.

Inside, the 944 featured two bucket seats in the front and two tiny seats in the back. The dashboard featured only three dials, unlike the 911, which featured five. Two additional dials were mounted on the center stack, for the clock and oil pressure. Later on, a four dial layout with six gauges was installed.

Under the hood, the 944 was fitted with a 2.5-liter engine, carried-over from the 924. It was paired as standard to a 5-speed Audi gearbox. As an option, a 3-speed auto from Volkswagen was offered. To balance the car, the engine was installed further back in the engine bay and the gearbox was in the back. That transaxle system allowed a better weight distribution.