Proton tried to prove to the world that it was ready to fight on the open markets with a compact-segment sedan named Preve, which means “to prove.”

Proton created its own platform, hired Italdesign Giugiaro to design the bodywork, and installed a range of engines developed together with the British carmaker Lotus. That combination should have brought more customers to the Malaysian company. A five-star crash-test rating awarded by the ANCAP was also a good starting point. Yet, the car had to face stiffer competition than the carmaker hoped for.

Giugiaro designed the Malaysian sedan with ascending lines and slightly sculptured side panels. The tall back and sloped rear windscreen created an image of a mix between a hatchback and a sedan. At the front, the three-lamp headlights were adorned at the bottom by a range of crystal-like daytime running lights.

Inside, Proton cut a deal with Bosch and received a multimedia system built by the German supplier. It offered an all-in-one package deal, fitted as standard for most export markets, especially for the Australian one. Due to the short wheelbase, the room in the back was not that big.

Depending on the market, Proton offered the Preve with a range of three engines, and all sported the same 1.6-liter displacement. The base version offered a four-valves per cylinder technology, and the middle one provided a variable valve timing while the top-of-the-range version was turbocharged. The carmaker paired the base version with a five-speed manual, while the other options were available exclusively with a CVT transmission and no manual option. 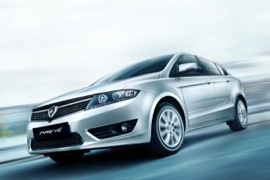