The first pick-up ever released by Renault, the Alaskan was a massive, robust and well-finished vehicle.
The Renault Alaskan had a muscular design that highly appealed to those looking for adventures.

Most of the components were borrowed from the bigger brother Nissan Navara, with the exception of the hood, the wings, the front and rear, as well as the wheels. Moreover, the Alaskan was produced at the Nissan’s plant in Barcelona.

At least, the Alaskan was equipped with a French engine taken from the Master van, the 2.3-liter unit developing 160 or 190 hp.

The interior was simple, classic and well put together, however, it looked and felt dated for 2016. The plastics were not very refined, however, the controls were intuitively placed and within reach.

With an increased rigidity of the chassis, the Alaskan had a towing capacity of 3.5 tonnes. While a stiffer chassis should compromise comfort, the five-link rear suspension kept the ride as comfortable as it could get, as the Alaskan was, after all, a 4x4 professional utility rather than a luxurious vehicle.

With a generous ground clearance of over 22 centimetres, the Alaskan handled rocky or muddy roads without problems.

As expected, the handling was not very precise, a very common thing among pick-ups. U-Turn on narrow streets were tedious and driving the Alaskan in the urban traffic was not an option.

The Alaskan was designed for people living in the country side. 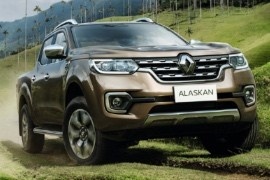