The Renault City K-ZE was the 6th fully electric vehicle in the Renault range and also the cheapest available on the market.
The crossover design offered great quality for its price and was basically a Renault Kwid with an electric power train.

The exterior was specific to the new Renault’s language and the K-Ze offered a premium look.

The interior had nice finishes, and even if lots of hard black plastics were used, they were well put together.

Luxury was not a word to defined the K-Ze’s cabin, however, the storage spaces offered were decent and the seats were comfortable.

Surprisingly, a big infotainment with a good image quality was offered.

Designed for city use only, the K-Ze offered only 44 hp and 120 nM. A single speed transmission was offered.

The narrow wheels mounted on the K-Ze were designed to save electricity.

The chassis was pretty solid for such a cheap car and the steering was adequate even on corners.

The K-Ze had an estimated range of 271 km, however, Renault advised on a maximum of 350 km depending on the road and driving conditions. 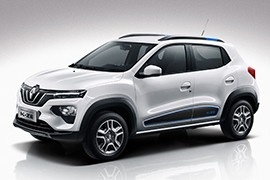