After failing to return on the GT vehicles with the Avantime, Renault tried again with a coupe vehicle based on the Laguna range.
It didn’t succeed.

The French carmaker Renault used to be a premium manufacturer before WWII and tried to return to that market again at the beginning of the 2000s. Vehicles such as the Avantime and VelSatis were targeted directly to the Premium customers, but the result was unsatisfactory. Renault had to re-calibrate its aim. It tried again with the introduction of the 2008 Laguna Coupe, a vehicle based on a successful medium-sized vehicle.

From the outside, there were only a few clues that the Laguna and the Laguna Coupe were related. Basically, the headlights and the hood were the only connection between them, even though those parts were different. At least they resembled it. The raked A-pillars and long frame-less doors were part of a new design concept for a car that should mark Renault’s return in the GT market. After all, Peugeot succeeded with the 406 and 407 Coupe. In the back, the taillights resembled the design of an Aston Martin.

Inside, the Laguna Coupe was offered in a few versions, including a cloth upholstery for the base models. From mid-level up, the leather-wrapped interior and advanced safety features were part of the package. A premium sound system was offered as standard or on the options list, depending on the trim level. There was room for four adult passengers.

Under the beautiful bodywork, the Laguna Coupe shared most of its parts with the rest of the Laguna range. It featured a McPherson independent front suspension and trailing arms in the back. A four-wheel steering system was on the options list. 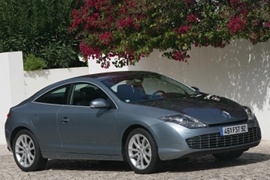