The Renault was responsible for reviving the European compact MPV market back in 1996 when it launched the Megane Scenic.
On the road to the 2016 model, it lost the “Megane” name and only the Scenic was kept.

For the 2016 model, the Scenic adopted the general image of the Renault brand, with an enlarged, chromed logo in the middle of the grille. Its proportions and shapes resembled those present on the Captur crossover and Clio. The fourth-generation was based on the Renault Megane platform and it was unveiled at the 2016 Geneva Motor Show.

The MPV was available in two wheelbases, named Scenic and Grand Scenic. While the shorter version could have accommodated up to five seats, the longer was available with up to seven seating positions. Moreover, the trunk was bigger. The longer version had a bigger window behind the rear doors.

Inside, both versions featured an infotainment unit with Bluetooth and TomTom navigation system. Unlike most of the cars on the market, the audio commands were not placed on the steering wheel, but on an auxiliary satellite on the steering column.

The suspension was independent on the front and with a torsion beam in the rear. The engine range included a 1.5-liter dci with 110hp, 130hp, and 160hp diesel, plus a 1.2-liter TCe gasoline with either 115PS or 130PS. Standard safety tech included auto emergency braking, lane departure warning, traffic sign recognition and cruise control on all trims and versions. 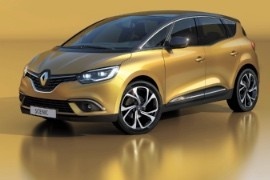