The French manufacturer put itself in pole-position for the ecology race, adding a new generation for its sub-compact electric vehicle, the Renault Zoe.
On the outside, the Zoe has received a redesigned hood, new bumper and, most importantly, LED headlights as standard. Even though Renault didn’t invest too much money in the exterior design for the new Zoe, things inside are different. In front of the driver, there is a 10” TFT display that replaces the classic analog dials. Due to the new screen, the driver receives constant indications to improve his or her driving skills for ecology. On the center console, there is the EASY LINK Renault infotainment system, which supports Android Auto and Apple CarPlay.

There are new interior material improvements, which are softer and nicer to touch. On the Iconic trim level, the seats are made out of 100% recycled materials. Other improvements are noticed in the space between the driver and the passenger. On the prolonged center console, there is the gear selector, used for different driving modes, including the B-mode, which allows one-pedal driving due to a boosted energy recovery system. Last, but not least, the Zoe has received an electronic park brake, which replaces the classical lever.

The most important improvement for the drivetrain is that now, Zoe is available with 110hp and 135 hp and with batteries of 40 kWh and 50 kWh, respectively. 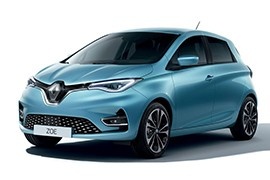