When Rivian said that its truck won’t be like anything else on the Planet, we said that “we heard that before.” Unless this time, the manufacturer was right.

While Tesla was struggling with its Cybertruck and smashed its side windows, a new carmaker worked hard to make a pickup even better in Michigan. It wasn’t armored, but it was more usable than any other truck on the market.

The R1T kept the shape of a pickup, but that was the only connection with the light utility vehicles it existed. Rivian placed the main storage compartment under the hood (frunk), which could have been opened electrically with the keyfob in the pocket. On the sides, behind the doors, there was another storage compartment long enough to sleep in it, but not too wide. In the back, the power-tailgate was able to electrically open 180 degrees so the user could reach easier to the spare-wheel storage space. At the front, the light-bar that crossed the vehicle from left to right was also the charging status bar, and the headlights were, of course, fitted with LEDs.

Inside, thanks to its completely flat floor, there was room for five adult passengers with enough legroom and headroom for everyone. Rivian installed a wide touch-screen for various car functions and the infotainment system in the middle of the dashboard. Instead of a regular instrument cluster, the driver relied on another display.

For the powertrain, the R1T featured four electric motors for the entire range. The base version featured fewer battery cells than the top version, but that still gave it a range of over 200 miles (320 km). The middle version was the quickest one, rocketing from 0 to 60 in three seconds. Rivian stated that the range was 400 miles (640 km) for the top of the range version. 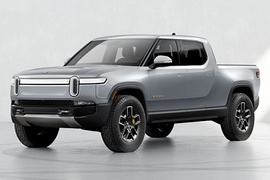