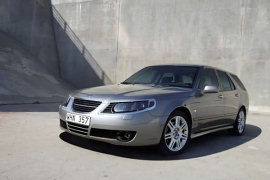 GM allowed SAAB to introduce a facelifted version for the 9-5 wagon in 2005, and the result didn’t surprise too many people; it was a larger but uglier version of the 9-3 station wagon.
In 2005, the Swedish carmaker tried to adapt more GM features in its cars. General Motors’ management already asked them to reduce innovations to keep their products on a competitive level. 2005 9-5 Sport Combi showed what that translated into Swedish was.

The car’s front fascia was identical to the sedan’s, with the same googles around the headlights, which looked like they were added aftermarket by a clueless customer. Only one horizontal slat from the grille was chromed, supporting the Saab badge, and the rest were kept unpainted. From its sides, the car’s designers decided to resemble the sedan’s shape on the C-pillars and darkened the D-pillars between the rearmost windows and the rear windscreen. The taillights were split between the quarter panels and the tailgate at the back, following the same shape as those installed on the 9-5 sedan, just wider.

Inside, Saab took more interior parts from GM’s bins, but their squared shapes didn’t integrate that well with the rounded shapes of the dashboard. The car’s wide instrument cluster extended over the center stack and continued on the center console. In the back, a split-bench expanded the trunk from 416 liters (14.7 cu-ft) to 1,489 liters (52.6 cu-ft), which was smaller than other compact-segment stations wagons. Still, the carmaker hoped to compete against Volvo V70 and the BMW 5-Series Touring, which offered way more interior room.

Under the hood, Saab installed a choice of seven engines, and two of them were fueled with ethanol. It was a bold idea, which didn’t match the market’s needs. 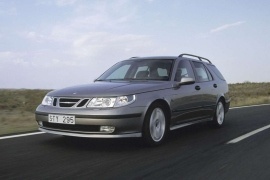 Saab introduced a facelifted version of its 9-5 range in 2001.
That affected both the sedan and the station-wagon version, which was named Sport Combi.

Europe switched to Euro 3 pollution norms in 2001, forcing most of the carmakers to change or upgrade their engines. Saab was one of them. Along with the powertrain upgrades, the designers tweaked the car’s look.

From the outside, there were some minor cosmetic changes to the car. There was a new bumper design, depending on the trim level or the vehicle version. For the Aero versions, an A-shaped grille in the lower bumper area made the car looks more aggressive. The rest of the range featured a more refined, elliptic grille with fog-lights enclosed. Its taillights were redesigned in the rear and featured a clear lens for the reversing light on their upper side, while its non-facelifted version featured a smoked lens.

Inside, Saab installed a few particular features specific to its brand. The key-fob was placed between the front seats, in front of the handbrake. Depending on the trim level, the car featured high bolstered seats at the front. The rear seats were split-folding and allowed an increase for the cargo area from 1047 liters (37 cu-ft) to 2064 liters (72.9 cu-ft), measured to the roofline.

GM had the Saab brand under its roof at that time. It supplied most of the engines and the technical platform. The 9-5 customers could choose from a wide range of gasoline and diesel engines. The 2.3-liter turbocharged unit was unique for the Swedish brand, while most of the others were carried over from GM’s European branch, Opel. 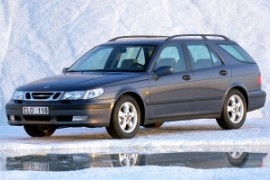 The station-wagon bodywork has different names, depending on the manufacturer.
If Audi chose the name Avant and Mercedes-Benz T-Model, the Swedish car-maker chose the SportCombi.

Saab 9-5 was the largest model offered by the Swedish company. Since it was owned by GM, it had to fit somehow on the market to not interfere with other products made by the same group. The 9-5 was built on the same platform with the Opel/Vauxhall Vectra and Saturn L-Series. It was launched in 1997 as a sedan and, a year later, the station-wagon version was introduced to the market.

Up to the B-pillar, the car was the same as its sedan sibling. Things got different after that, with an extended roof-line and a roof spoiler over the tailgate. The car featured some interesting ideas, such as the tailgate-mounted lights to see around the loading area or to be seen from behind by an oncoming vehicle. It is well known that Saab was very concerned about safety. The Swedish company was the first car-maker in the world to introduce standard seatbelts in 1958.

Inside, the only change when compared to the sedan version was the rear bench, which could fold flat to extend the trunk area.

For the engine, the Swedish car-maker installed some of the engines installed in the sedan version. It also came equipped with an option for a five-speed automatic gearbox. The 5-speed manual was standard.