SEAT introduced the second generation of the Cupra in 2005, and in the following year, the Spanish carmaker unveiled the most powerful version of its compact hatchback.
SEAT pitted it against the best hot-hatches, such as the Honda Civic Type R, Ford Focus RS, or Renault Megane RS. It was a bold move since the carmaker already built the Cupra FR with 200 hp, but it paid off.

The Cupra was the most streamlined vehicle among its siblings, the Golf and the Audi A3 Sportback. It also shared its platform with the Audi TT and the Skoda Octavia, but its body shape differed. Compared with other Leon on the market, the Cupra version featured a different front bumper with a broad, trapezoidal-shaped grille on the lower side. From its side, the unique 18” light alloy wheels enhanced the car’s sporty look. At the back, the carmaker placed the wide lettering CUPRA on the liftgate. Later on, the version became a separate brand for the Spanish carmaker.

Inside, the Cupra featured sport bucket seats with integrated headrests embroiled with the Cupra lettering in contrast color. The red stitches were also part of the package. The tachometer took center stage in the instrument cluster while the speedometer was wider and pushed on the right side. SEAT installed the third dial with an LCD for the onboard computer and the fuel and coolant temperature gauges on the left side.

Under the hood, SEAT carried over the same powerplant as the Golf GTI that provided 240 hp and sent them to the front wheels via a six-speed manual. Two years later, the carmaker improved the lineup and introduced the Cupra R. 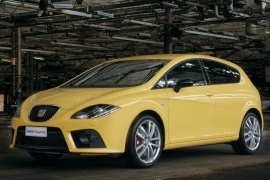