Skoda introduced the Rapid lineup in 2012 as a compact-segment vehicle, filling the space between the small-sized Fabia and the mid-sized Octavia.
When the Czech carmaker introduced the Octavia range in 1996, it was the most extended compact-class vehicle on the European market. By 2012, it was already in the mid-size segment, and there was an empty slot which Rapid filled it. The car was available in two body shapes: a sedan and a hatchback named Spaceback.

Its design resembled the Czech cubist trend, and the name evoked a sporty coupe from the mid-’80s. The horizontal angular-shaped headlights were narrow compared to the front fascia’s height and produced a sporty image. The grille with 19 black vertical slats was already a signature feature for the carmaker, and it was similar to the rest of the Skoda range. Its hatchback profile with a raked-forward tailgate showcased a third side window behind the rear doors.

Inside, the Rapid featured a minimalist design for the base trim levels, with a clean dashboard and a flat front fascia for the air vents. Its rounded instrument panel was carried over from the Fabia lineup and sported two large dials and an LCD between them for the onboard computer. Skoda installed an infotainment system with a 5” touch-screen on the center stack for the upper trim levels. Despite being shorter than its sedan sibling, the Rapid Spaceback provided more legroom for the rear passengers. Its split-folding rear bench extended the trunk size when folded from a regular 550 liters (19.4 cu-ft) to 1,490 liters (52.6 cu-ft).

Under the hood, the carmaker offered a choice of gasoline and turbo-diesel engines ranging between 86 hp and 122 hp. 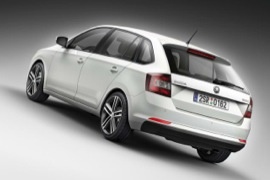