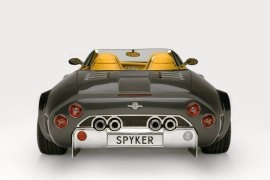 In 1922, the Dutch Hugo Hope Alexander von Pallandt, won the hill climb race from the Mount La Turbie with his Spyker C4 Tourer.
Fast forward in 2005 and Spyker has decided to build a vehicle to commemorate that victory. In commemoration of that win, Spyker put the “La Turbie” name on its C12.

Unlike the other Spyker built by the Dutch company, the C12 was the first to use the 6.0-liter W12 engine from Volkswagen. It offered 507 hp and 600 Nm (443 lb-ft) of torque for the open-top roadster. The bodywork was designed by Zagato and looked pretty much the same as the C8 Spyker, Apart from the four exhausts in the rear, different headlights and longer wheelbase, few would notice any difference. But the C8 had 4 cylinders less than the C12.

Like in any other Spyker, the Dutch company decided that they want either very good drivers or dead customers. The Spyker cars didn’t have any nanny to keep them on the road. No ESP, no traction control and not even an automatic gearbox. Everything was pure and straight: a manual gearbox and a good driver.

The details in the vehicle were amazing. The steering wheel had a 4-blade propeller as spokes. The dashboard was covered in leather and aluminum. The switches looked just like they were stolen from a WW2 airplane. But they looked gorgeous. The car was sold in 25 units before the manual gearbox with paddle-shifters behind the steering wheel would appear.