Subaru refreshed its BRZ model and gave it more punch and a full technological pack to enhance the little coupe.
In 2012, Subaru and Toyota introduced their common project for a sports car coupe. It was sold under three names: Subaru BRZ, Toyota GT86, and Scion FR-S. The latter was dropped when the Japanese sub-brand collapsed, but the other two models survived. It was a joint project where Subaru brought its flat-four engine, and Toyota made the bodywork. Soon after its launch, the customers started to ask for more power, but it was difficult to offer something more.

Following the same recipe as most of the facelifts on the market, the 2021 BRZ featured a new bumper design and a new pair of headlights. Due to the wider grille in the front apron and the vertical side-scoops from its bumper, the car looked wider—a new LED daytime running light system with a J-signature enhanced the car’s appearance. The BRZ featured a new set of taillights and a small ducktail on the tailgate in the rear.

Inside, Subaru decided to introduce a fully digital instrument cluster with a TFT display instead of analog dials. It could show various information such as G-forces, revs per minute, speed, oil pressure, coolant temperature, amp-meter, and speed. On the center stack, Subaru placed the 6.2” infotainment unit named Subaru Starlink.

Under the hood, there was a choice of two engines, depending on the market. The 2.0-liter flat-four was upgraded with various internal components and provided 205 hp. The top version was powered by a 2.4-liter, which offered 228 hp. Both versions were paired as standard to a 6-speed manual, and a new 6-speed auto was on the options list. 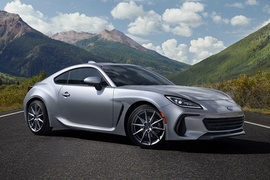