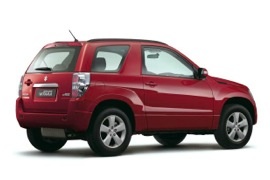 Suzuki refreshed the Grand Vitara/Escudo lineup in 2008, preparing the car for the Euro 5 emission standards and enhancing the car’s exterior.
The Grand Vitara/Escudo was one of the best-selling cars in its class globally. It was available under different names on different markets and sported different badges as well. To keep its prices low, the carmaker produced it in Hungary, Algeria, and China. For the drivetrains, it worked together with Renault for the diesel powerplants.

On the outside, the 2008 model featured a new grille at the front with curved horizontal slats instead of the straight ones used between 2005 and 2008. Its rectangular headlights with clear lenses. The three-door version looked sportier thanks to its long rear quarter panels and the raked-forward B-pillar.

Inside, the carmaker improved the safety with redesigned airbags. At the front, the bucket seats featured side airbags, complementing the dual front airbags. The redesigned center stack sported a circular digital display for the climate control unit on the lower side and a new CD radio on the upper side. In the back, as usual, there was limited room for the rear passengers due to the short wheelbase.

Under the hood, Suzuki replaced or upgraded the engines. It dropped the former 2.7-liter V-6 and installed a GM-sourced 3.2-liter instead. For the European market, the carmaker offered a choice of two gasoline and a Renault-sourced turbo-diesel powerplant.