Being the 12th generation sometimes is good, especially when your name is Corolla and you are the best selling car in the world if we don’t take into account Ford F-series, which is a pickup-truck.
The Corolla is now quieter, safer and cleaner than before. It even ditches the diesel engines! The Japanese also ditched the Auris badge for the hatchback.

They say to not judge a book by its cover. It is the same with the Corolla. From the outside, some might say it is a nice facelift but actually it is a completely new car based on the Toyota New Global Architecture (TNGA) GA-C. The 2019 Corolla range has a new sportier look, and it is equipped with a new infotainment system that allows Android Auto and Apple CarPlay.

Thanks to the new platform, the new Corolla has four-wheel independent suspension and a different mounting for the front McPherson type to improve road-holding. As an option, the Corolla Touring Sports and Corolla Hatchback may be equipped with an electronically controlled adaptive suspension.

The engines offered are a 1.2-liter turbo with 114 HP for the hatchback and Touring Sports and a 1.6-liter naturally aspirated 132 HP gasoline engine for the sedan. True to its words of commitments on the ecology side, Toyota offers two choices of hybrid technologies: a 1.8-liter with 122 HP and a new 2.0-liter with 180 HP. 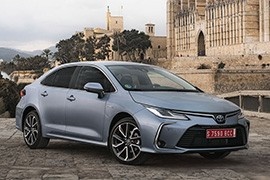